Old and new adventures with fatty acids and their oxylipins: The road towards personalised clinical nutrition. 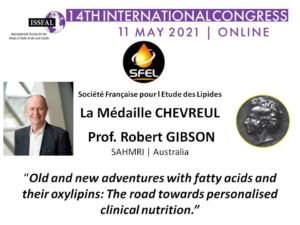 Each year since 1963, SFEL is rewarding an eminent researcher for his work in the world of lipids by conferring on him or her the CHEVREUL Medal in remembrance of the founder of lipochemical research, Michel Eugène CHEVREUL. In 2021, Pr Robert (Bob) Gibson, Professor Emeritus at the University of Adelaide, and Honorary Principal Research Fellow at the South Australian Health and Medical Research Institute (SAHMRI), was honored with the CHEVREUL Medal.

Bob Gibson is a clinical biochemist/nutritionist who has published over 350 peer reviewed papers in a variety of paediatric, nutrition and biochemical journals. He has designed and conducted a range of randomised clinical trials involving nutrition interventions in the perinatal period, and has also tested the effects of interventions with iron, selenium, probiotics, nucleotides and long chain polyunsaturated fatty acids on infant biochemistry, growth, physiology and developmental outcome. Notably Bob Gibson has conducted several clinical studies on the role of dietary DHA in ensuring optimal infant neural development, and was the first to demonstrate that term breastfed infants had higher brain DHA concentrations and had improved neural maturity and greater erythrocyte DHA relative to those fed formula with no DHA (https://www.ocl-journal.org/articles/ocl/pdf/2016/01/ocl150039-s.pdf).

Bob is a Fellow of the Nutrition Society of Australia and the International Society for the Study of Fatty Acids and Lipids (ISSFAL). In 2012 he was awarded the Alexander Leaf Distinguished Scientist Award for Lifetime Achievement from ISSFAL.  He was one of the strong personalities who organized the 2 ISSFAL congresses organized in Australia which were held in 1992 at Adelaide and in 2006 at Cairns. Bob has been an enthusiastic collaborator and mentor to many young scientists in Australia and internationally. He is especially known for hosting vibrant conferences. His conference has been published in the Journal OCL at https://www.ocl-journal.org/articles/ocl/pdf/2021/01/ocl210034s.pdf