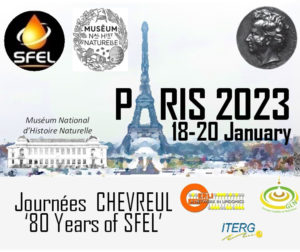 SFEL is a scientific association whose objective is to promote dissemination of knowledge in the field of lipids and challenges in research and development in this field (https://www.sfel.asso.fr/), mainly through the regular organization of scientific days "Journées Chevreul" and the publication of the journal “Oilseeds and fats, Crops and Lipids” (OCL, https://www.ocl-journal.org/fr/). Our society was created almost 80 years ago and formerly known as the "Association Française pour l'Etude des Corps Gras" (AFECG).

The scientific days « Journées Chevreul » are known in the world of lipids both nationally and internationally (https://www.sfel.asso.fr/journees-chevreul/congres-precedents/). Since 2007, we have also organized the Journées Chevreul “Lipids & Brain” every four years, which bring together between 100 and 200 participants in this field, and publish the articles of the presentations in the form of special issues in OCL. Since 1963 and twice a year, we have awarded a Scientific Medal to French or foreign scientific personalities who have contributed significantly to the development of scientific knowledge or industrial achievements in the field of lipids. This medal is awarded under the name "Médaille Chevreul". In 1993, for the 50th anniversary of the association, the Chevreul Gold Medal was awarded to the 1993 Nobel Prize in Physics, Professor Pierre-Gilles de Gennes. Since then, other outstanding scientific personalities have also received this medal such as Jean-Marie Bourre (1989), Michel Parmentier (2005), André Crastes de Paulet (2005), Frédéric Carrière (2007), François Mordret (2008), Michel Lagarde (2010) and Thierry Durand (2018) for the French, Stanley Rappoport (2007), Michael Crawford (2015), Stephen Cunnane (2017), Robert Gibson and Jun Ogawa (2021). For the coming years, the CHEVREUL Medal will be awarded in 2022 to Marie-Caroline MICHALSKI for the excellence of the scientific work carried out in recent years in the field of Human Nutrition and Lipids. The medal will be awarded on September 23, 2022 in Paris during a scientific day organized with CNIEL around « Dairy Lipids and Human Health ».

To celebrate the 80th birthday of SFEL and to thank all Chevreul Medalists who have contributed to the success of the ‘Journées Chevreul’, SFEL is pleased to announce the exceptional ‘Journées Chevreul’ which will be held on January 2023 in a famous place of science in Paris, the Museum National d’Histoire Naturelle (MNHN). MNHN is one of the birthplaces of chemistry where Chevreul worked for more than 40 years and has isolated, characterized and named cholesterol, for example.

These anniversary ‘Journées Chevreul’ will provide an overview of all the research themes on lipids supported by SFEL/AFECG since its creation and will be the occasion to award the Chevreul Medal 2023 to Michel Linder (LiBio, ENSAIA Nancy). They will take place on 3 consecutive days from January 18th to 20th. They will be boarded with an opening ceremony about Chevreul and SFEL followed by a series of lectures delivered by both Chevreul Medalists and invited speakers. Oral and poster communications will be also presented after selection. They will be organized in collaboration with Museum National d’Histoire Naturelle (MNHN) and our colleagues from two french scientific societies, the Groupe d’Etude et de Recherche en Lipidomique (GERLI) et the Groupe Lipides Nutrition (GLN), around the following 6 main themes (with scheduled speakers):

The Journées CHEVREUL 2023 will be held in Paris at the Museum National d’Histoire Naturelle (MNHN) located in the Jardin des Plantes. MNHN is one of the birthplaces of chemistry in the world created in 1635 by order of the king Louis XIII. The Royal Garden was first created presenting medicinal plants, their uses and the search for active ingredients. In 1793, two chemistry

chairs were created. While Vauquelin discovers chromium, Chevreul isolates, characterizes and names cholesterol. The best-known students trained in these chemistry chairs are Moissan, the first Frenchman to have receive the Nobel Prize in Chemistry (1906), Arnaud, successor to Chevreul and pioneer of research in plant chemistry, Étard , Bertrand, Verneuil,

Becquerel and Curie. Today, chemistry at the Museum remains focused on molecules of natural origin, but with a reinforced ecological axis. At the crossroads between earth, life and human sciences, the Museum focuses on nature and its relationship with the human race as illustrated in the following video.

The Congress will be held in the majestic amphitheater de VERNIQUET built at the end of the 18th century. This large amphitheater of neoclassical inspiration was built in 1787 by the architect Edmé Verniquet and was intended for the teaching of botany. It has seen illustrious teachers pass through: Antoine de Jussieu, Etienne Geoffroy Saint-Hilaire, Georges Cuvier, Louis Joseph Gay-Lussac, Claude Bernard or Henri Becquerel... Completely restored in the 90s, the amphitheater can currently accommodate more than 300 people in the best conditions. 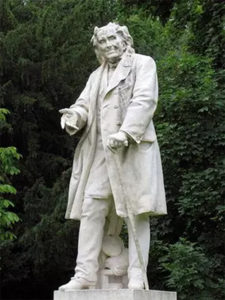 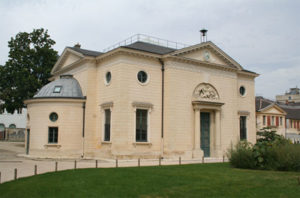 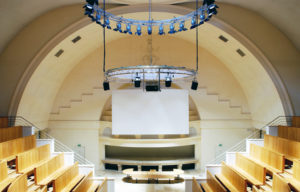 Eugène-Michel Chevreul, born before the French Revolution, died at the age of 103 years during which he knew several political regimes: four kingdoms, three republics and two empires, following four revolutions, 1789, 1830, 1848, and at the Paris Commune in 1871. He was one of the greatest French scientists of the 19th century, whose name remains inscribed on the pediment of the Eiffel Tower by Gustave Eiffel with those of 71 other scientists, engineers or industrialists because they honored France from 1789 to 1889. For chemists, Chevreul isolated fatty substances, and determined their molecular

structure. For painters, dyers, upholsterers, he is the creator of the law on the simultaneous contrast of colors and the inventor of a very elaborate chromatic circle which takes complementary colors into account. For Claude Bernard and the physiologists, Chevreul thought of the symbiosis of the five senses which he called properties organoleptic. We must consider Chevreul as an outstanding experimental scientist, encyclopaedist and science historian. He will work in two prestigious places, as researcher, Professor and director of the Museum National d’Histoire Naturelle between 1836 and 1879, and as director of the de l’atelier des teintures à la Manufacture des Gobelins. During its long existence, Eugène-Michel Chevreul has published nearly a thousand articles and a hundred books on the history of science, chemistry, physiology, colors, photography and many other subjects. 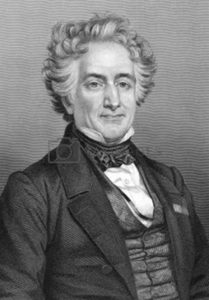 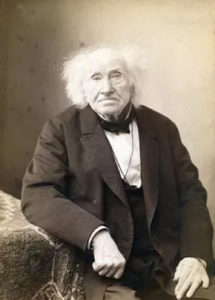 Please send your abstract at journeeschevreulsfel@gmail.com