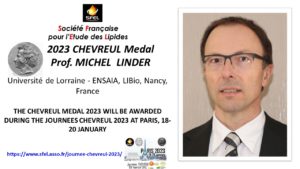 Michel Linder is Professor at the University of Lorraine, more specifically at the National School of Agronomy and Food Industries (E.N.S.A.I.A.) in Nancy. He carries out his research activity within the Laboratory of Biomolecular Engineering (LIBio) which he directed from 2013 to 2017. After a doctoral thesis obtained in 1996 in "Biotechnologies and Food Industries", he trained in marine lipochemistry at Dalhousie University at the Canadian Institute of Fisheries Technology in Halifax, Nova Scotia (1999). Michel Linder has published more than 120 primary articles (https://www.researchgate.net/scientific-contributions/Michel-Linder-11716594) and has developed several thematic axes on:

- The study of the functional and nutritional properties of protein substrates.

- The fractionation of oils and fatty substances on membrane supports, and the understanding of the phenomena of interaction between hydrophobic compounds and filtering materials

- The development of lipid fractions enriched in polyunsaturated fatty acids by enzymatic reactions combined with a membrane filtration process.

- The long-chain polyunsaturated fatty acids (DHA, EPA) and marine lecithin, and vectorization in the form of emulsion and nano-liposomes.

- Understanding the physicochemical mechanisms involved during the processes of self-assembly of phospholipids at the interfaces and the phenomena of encapsulation and controlled release of biomolecules in liposomal form or nanoemulsions. Michel Linder also carries out an important university teaching activity and has been responsible since 2018 for the Nutrition and Food Sciences (NSA) mention as well as the standard "Food, Nutrition, Cosmetics" (ANC) course.

Lastly, he was President of the French Society for the Study of Lipids (SFEL) from 2016 to 2018 and organized in Nancy the Journées Chevreul 2017 "Lipids & Brain IV".